Glide for Pride raised a total of £12,458 on Indiegogo (and with offline donations) to bring their LGBTQIA+ adventure documentary to life.

Frit, the lead of Glide For Pride cycled and rollerbladed all across England to share stories from the LGBTQIA+ community. A film maker himself, he has made this amazing documentary to share the voices of lesser heard adventure folk. 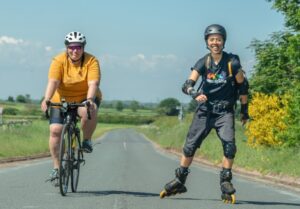 Frit took our 8 week crowdfunding course and came to several of our crowdfunding power hours earlier this year and has now launched his campaign.

Within 2 weeks they had hit 40% of their funding goal and had 181 backers and in addition to that they added a new limited reward. the ‘Kula Cloth’ and sold out of that the SAME day it was launched. They released several new rewards, including Patagonia and SprayWay goodies throughout the campaign, held many instagram lives to bring in wider audiences and encouraged all donors to share why they supported Glide For Pride via their instagram stories templates.  They ended their campaign with 457 backers.