10 Ways To Spot A Crowdfunding Scam

Unfortunately, more and more illegitimate crowdfunding campaigns are popping up because of crowdfunding’s increase in popularity among the general public and the increasing ease of setting up your own crowdfunding platform. Moreover, because crowdfunding pulls on our heart strings, we often think with our hearts, not with our heads. So here are 10 ways to spot scammy campaigns and therefore protect yourself and avoid them*

1) Have other people backed the campaign? Although this might not mean it is a scam, it does at least show it is deemed to be unsuccessful if the owner won’t even put some money in the campaign. If you don’t think it is a scam at this point, atleast wait until you see others pledging to it before you part with your cash.

2) Has one person backed the campaign with a large amount of money? If this happens, it is usually a scam to make your think it is well liked and successful. But if it comes only from 1 or 2 people, this is when to get suspicious. That large sum of money could just be from the creator and his/her mum. The number of backers is just as important as the amount pledged – wait until at least 15 people have pledged before you part with your cash. 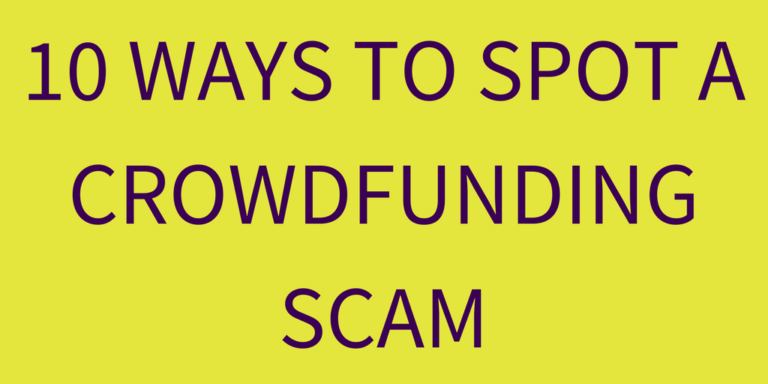 3) Is the campaign hosted on a reputable platform? Although there are over 2000 platforms in the world, there are only a select few you should actually trust and even then some of these are known to have minimal due diligence therefore allowing scam campaigns to pop up. Of the reputable platforms (Kickstarter, Indiegogo, Fundsurfer, Crowdfunder, Seedrs, Crowdcube, Just Giving, YouCaring, GoFundMe, GlobalGiving, Local Giving, SpaceHive) You should still be careful with GoFundMe, YouCaring, SpaceHive and Indiegogo as their vetting levels are quite low so take all other points in this article into consideration when backing campaigns on those platforms.

4) Is the project page information all too ‘fuzzy’? Does the information written on the page leave you wondering, “I am still not sure what I am backing or how this works or where the money is going?” If this happens, and you are left asking more questions than you came in with, it is probably a scam.

6) Where is the money going? If they need to raise a specific amount to purchase something, and they are doing a take-what-you-make campaign rather than all-or-nothing, there is a high chance it is a scam. For example, if they need £2,000 to buy the camera they need to become a professional photographer, but they will take any amount given, what will they do with that money if they only raise £150? They cannot buy their camera with that! Will they buy a cheaper one? Or will they spend the money on something else? This is important to know.

7) Is there a video showing a few different people that are all supporting the campaign? To get numerous different people to speak in a video that is a scam is hard. If they can be easily identified and are talking about a scam, this opens them up to a lot of problems. If there is no video, no identified creator and no other voices backing the project, there is a high chance it is a scam campaign.

8) Has the creator proved that they can do it? This might seem obvious, but the other day I saw a campaign looking to raise money to make a short film, yet their crowdfunding campaign did not even have a video. This made me think, if you do not even have a video, how can you prove you can make a film? If they are looking to make something and do not have a prototype or some examples showing their previous work etc, it is probably a scam.

9) If you ask them questions via their email address or social media channels, do they respond? If they are scammers they probably won’t bother. If they are legitimate, they will want your support and your backing both financially and socially so will take the time to reply.

10) Is the campaign too emotional? Does the situation all seem a bit unfortunate/unrealistic? Or does the project seem too good to be true? Don’t be ruled by your emotions – yes all these bad things could have happened – but is it likely? Yes this one product could answer all of life’s questions – but is it likely? – Always trust your gut!

On a final note, this article is not meant to put you off giving to crowdfunding campaigns! It is only meant to help you to become more aware of scams so you give to legitimate campaigns and continue to have good feelings about the world of crowdfunding. If you come across a campaign that you want to give to but are still unsure about, after following these 10 steps, send an email over to info@crowdfund-360.com and our crowdfund investigator-fairies will do their work and analyse it for you! 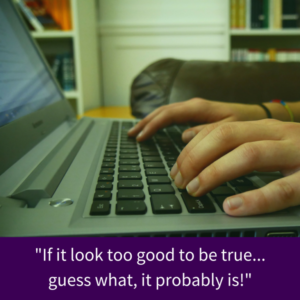