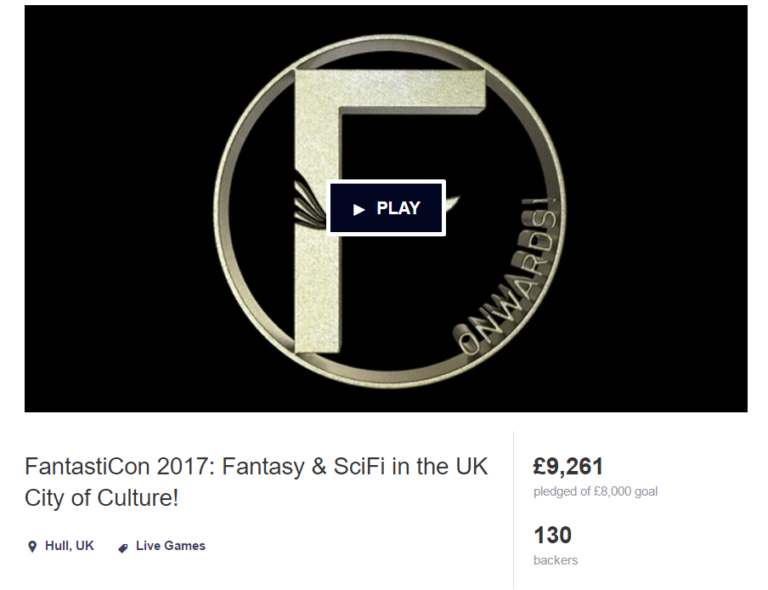 Today we are interviewing a seasoned crowdfunder. We provided some consultancy for Daniel. He raised £9,261 (original target £8k) from 130 people in 30 days for FantastiCon, an annual SciFi/fantasy/gaming and Live music event taking place in Hull, UK Sept 2nd/3rd.

He came to us after having a mid-campaign panic (totally normal). Anyway, he went on to raise £9,261 from 130 people in just 30 days. This is his fourth campaign so we asked him to share some of his insights with you in order to make your own campaigns even more successful…

Daniel did really well on Kickstarter. Read his answers to our questions below:

This wasn’t your first campaign was it Daniel?

This was my 4th campaign. The first was a doomed audiobook we tried on Indiegogo. We knew very little about crowdfunding and dived in feet first. That was a mistake! We only raised £1.5k out of our £6k target. We learned a lot of lessons from this failure and pressed on to our first Kickstarter project, which raised over £35k.

We then went out to raise £10.5k from last years FantastiCon and then yes, this year we raised £9k.

What were the key learning points you took from each of the campaigns?

The first was a revelation about just how supportive, energetic and creative our community is, because of this we created an offline space for them to hang out and that’s how FantastiCon was born. 2014 FantasiCon was great, but 2015 FantastiCon was a financial disaster which cost us over £15k due to a last minute venue change. Although this damaged the company, the event was a success and hundreds of people came to enjoy the weekend. We took this learning into account when running the campaigns of FantastiCon 2016 and most recently 2017 and we keep adding new things to the events, like live music.

How long did it take to plan the campaigns?

From start to finish, I’d say each of the campaigns took around 3 months of careful planning and preparation. We bounced ideas off one-another, put together the copy, images and the all important video.