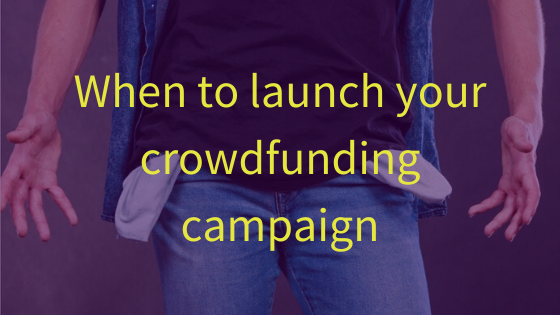 Of course, crowdfunding platforms have no restrictions on when you can run a crowdfunding campaign — they like projects on their sites year round. But statistics show there are times of the year you’re more likely to succeed at reaching your target, and more likely to raise more money. So why add to your stress and work harder to raise less money simply by launching in the wrong month?

If you take these following 5 points into consideration, you will launch your campaign when your audience is much more likely to support you and thus you will raise more, with less stress. Because after all there is no point trying to sell ice to an eskimo right?

With all the below questions, think about and apply them to 3 areas, 1) your own industry, 2) your own ideas about your target audience 3) the data from your current audience. Combining all three will lead to a winning campaign.

Does your audience currently have money to spend?

You’re running a crowdfunding campaign, you obviously need people to give you their money. But there are certain times of the month and year when people have more money or less money to part with.

To run your campaign when your audience is ‘skint’ means to work harder for less cash — why do that to yourself? Think about your own spending habits and those of your target audience, do they have the same level of disposable income in January as they do in March? Do they have the same amount of freedom to spend at the beginning of the month versus the end? If you are currently selling, can you notice patterns in the sales?

Generally speaking, it is always wise to plan the launch of your campaign after paydays (yay — more cash to spend) and away from major holidays (boo — obligations to spend on)

Does your audience currently care about your product/offering?

Just like selling ice to eskimos…. does your audience want your product now or more importantly, when do they want it? You are always going to raise more money for an ice cream crowdfunding campaign if you run it before summer and deliver the product in summer, than if you run it in November — no one wants ice cream in November (in the northern hemisphere!). It makes sense right? Equally if you are a snowboard brand (again, based in northern hemisphere) launching your campaign in May, will only be clever, if you are marketing it with the guaranteed delivery for this years ski season — but you will still raise more if you ran it in September/October — when people are actually thinking about snowboarding and the cold weather.

Think about your business/charity, when does your audience most seek out your offering?

We all know about the crazy Potato Salad guy who raised $55k to make potato salad, right? Yes this went viral, but it was clever as hell! It was launched on the day of the year in USA, most American’s search for ‘how to make a potato salad’ (July 3rd, in case you were wondering)— if that’s not using the time of year to boost your campaign — I don’t know what is!

Can you jump on any other related PR?

Similarly to jumping on trends such as the time of the year, jumping on times when the press is already working hard and promoting your industry/cause helps save you time and effort too. This is particularly good for charities and businesses for good. It wouldn’t work against you running a female focused crowdfunding campaign in September, but it would work in your favour running it alongside International Womens Day (March 8th). Journalists are already looking for stories to write about on your very topic, the audience is already prepped to support female focused campaigns. Essentially, the media has gone a lot of the groundwork for you. Here is a list of UN awareness days.

It can also work for other important times of the year, such as Valentines Day, Easter, summer holidays, back to school, January blues etc. Think about the themes the media works across and which you could possibly coincide with.

Is your audience procrastinating on their device?

There is no point sending an email, launching a crowdfunding campaign, expecting a reply, retweet or any kind of call-to-action to take place if your audience is either a) not on their mobile phone/laptop/computer/tablet or b) too busy to check such things.

Let’s break it down…

There are different times of day different people are procrastinating so depending on your audience it’s best to use this to your advantage. Those who commute to work by bus/train probably have the morning rush hour to procrastinate on their device — a time which those who drive do not have.

Parents have to feed, bathe and put their children to bed so are probably quite busy around the 5–8.30pm and therefore not playing on their electronic devices.

It’s also the same with the working week. You arrive Monday, loads of emails to trawl through and work to get done. You want to leave Friday with your inbox empty, so you power through that. Tuesdays and Wednesdays are statistically the days you procrastinate most.

It is also the same with the time of the year. If you’re on vacation or on the beach, at a BBQ, enjoying the good weather (which is rare in UK), again you’re less likely to be procrastinating on technology — so this is something to bear in mind when launching your campaign.

Have you drummed up enough interest?

It’s rare we buy things the first time we see them — even rarer we buy things we have never seen — because how could we? The best time to launch your crowdfunding campaign is when you have already built up the excitement, built up a movement, a community and have all your potential customers (at least that first 40%) ready to give you their money. This means as soon as you click that launch button, the money will come flooding in.

This will make your campaign look better to everyone else who was a little more skeptical. they’ll be thinking wow they raised 50% in 6 hours, it must be good! Contrast that to 2 weeks in and only 5% raised form a handful of backers, those skeptics will stay skeptic and won’t be giving, regardless of whether they have the money or not.

If you want to play a little game, have a think about the following three campaigns and email me when you think they’d have the highest chance of succeeding and raising the most money.

Obviously, there is more than just this that goes into a successful crowdfunding campaign. You need a great story, great imagery/visuals, great marketing strategies and creative content too. At Crowdfund 360 we work with our clients on all these elements and more.

If you’re interested in running your crowdfunding campaign under our guidance fill out this form.